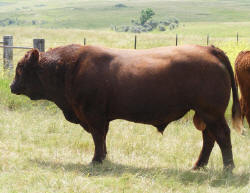 From the sale catalog:  “A deep sided meatwagon by Monoply.  HERD SIRE Prospect in this complete package of maternal & performance.  Ulmar’s dam, 380 is a perfect uddered Knockout daughter that weaned well over 75% of her body weight”.   He is still a meat wagon at maturity.    He really stamps his calves.  Every bloodline we crossed him with has worked, especially the Stealth & Big Red.   About half of our 2012/2013 calves will be sired by him.  His 4 2011 sons had an average feed efficiency score of -2.0525 for a 3.456 ADG, which appears to be the best sire group of the Salers on test at Midland (2011-2012).  Unfotunately, he got a growth in his throat that moved into the bone & we lost him in the fall of 2012.  He was a BIG birth weight bull.  Ulmar sired some AMAZING calves, wide topped, deep sided, big butted, high performing.  His influence will live on for a long time here thru his daughters.

Big Red was a surprise acquisition.  He was one of Ron Nansel’s herd sires.  When Ron had a partial dispersion, we were able to purchase him.  We lost him unexpectedly & 2002 was our last calf crop out of him.  We have 20 of hisdaughters currently in production.  They are tremendously great females &  are still young.  They are easy fleshing, deep bodied, strong topped.  His daughters cross with any bull we’ve put them with, but the cross with Stealth is incredible.  “DY Montana 210M” is a prime example of this cross.  His mother is still producing herd bulls.  We will be forever grateful to Ron for selling us this great bull.

ASA Trait Leader Stealth is Homozygous Polled.  He had the most incredible personality.  Ourdaughters out of Stealth are quickly becoming our most productive cows.  They are beautiful females that are deep bodied, easy fleshing & carry his exceptional Disposition.  Every year, they get better.  We do not agree with his milk EPD, as our Stealth daughters milk.   Stealth went to greener pastures on 9/28/04 as he had to be put down.  He will have a major impact on our breeding program for many years to come thru AI & his progeny.  Stealth has changed our lives forever as well as the Salers Breed!  As of fall of 2006, he is the number 1 sire used.  As of January 2007, Stealth is the first bull to have both a son (DJF Navajo 93N, 2004) & a grandson (PCSL Spark, 2007) win the coveted “Breeders Futurity” in Denver.  Thank You Bill & Floretta Helm for raising & selling us such an incredible bull.  Stealth, you are definitely One of a Kind!!!!!!!!! 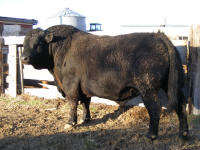 The best word to describe Montana  was “Awesome”.  He just kept surprising & impressing us.  He has the Stealth disposition, is extremely thick, long, has a huge hip and polled (small scurs), besides being an extremely easy keeper.  He is built a lot like his grandsire (ARN Surebet 24F).  All the females in his dam’s pedigree are incredible productive cows, as well as his sire’s mother.  The other 25% is Salers X, he is probably 87.5% Salers.  His maternal grandmother , Spook, was put into the embryo program in 2004. He is a proven big Rib Eye bull (ranked #2 in the 2007, 2008 & 2009 Trait Leader Sire Summary & #1 on the 2010, 2011 list) with loads of performance.  His daughters are extremely long, with an awesome hip, deep bodied, have a beautiful head & appear to be easy fleshing.  They are tremendous cows with super maternal, beautiful udders & great performance.  When we took the ear notch for the BVD-PI testing, we didn’t even have to put him in a chute or even a small area.  We just started currying him, then while he was enjoying that, we took the ear notch (not once but twice as the first one fell into the manure).  We had a witness, or no one would believe us how easy it was……   Semen is now available for commercial use only at $10/straw. Unfortunately, we lost hismother in 2003 to an injury, so cannot verify his parentage, to get an AI certificate for him.  SOLD……. Sale Day Weight 2665#

“Chucky” was an easy fleshing, extremely thick bull .  He was SUPER gentle.  His sire is a Multi National & Denver champion.  His dam is the grand dam of the Multi National champion JFW Packer 41F.   She was 16 years old when he was born & raised him to a 620# weaning weight in Mid-October & held her condition.  His calves are extremely thick & smaller framed but are born are very easily.  They have performed well in the feedlot.  The 2 year carcass averages on 33 head sent to the feedlot, Carcass Wt-782#, Fat Thickness-.44, REA-14.59, Quality Grade-2.33. We sold one of hisdaughters at the 2007 Salers Supreme Sale.  We crossed him on our “Spook” females & WOW what a cross.  Birth weights went up significantly, but what thick bulls.  They will catch your eye!!!!!  His first daughters calved in 2007 & they are tremendous mothers, easy fleshing & cycled within 30 days of calving.   We will be keeping many more in the future.  SOLD……. Sale Day Weight 2190#